skip to main | skip to sidebar

Okay, so this post is about 9 months overdue..but hey we've been busy.

So where did we leave off? Laos I think. Well we actually finished our trip in Vietnam but we never got around to posting anything about it..so here it goes.

Vietnam was great..one of the easier countries to plan our travels through..we started in Hanoi in the north and headed south.

Vietnam is the quintessential image of french Indochina. This is probably insulting to Vietnamese nationals who have fought several wars in the last century to secure their Independence from among others the French and the Chinese but hey..

Anyway, Hanoi is a cool old colonial city where modernity has intertwined itself with the old world in the form of cellphones, neon lights and narrow cobbled streets overflowing with mopeds. 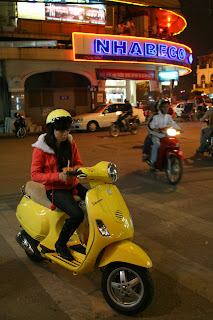 From Hanoi we migrated south to the cities of Tam Coc, Hoi An, and Hue. Each with its own indelible charm. Tam Coc is like Halong Bay with out the bay, instead a river winds its way through a myriad or karstic outcrops and nook and cranny villages. It's reminiscent of villages and farmers, of dragons and mystics. This was probably the most magically scenic areas we had visited on trip. 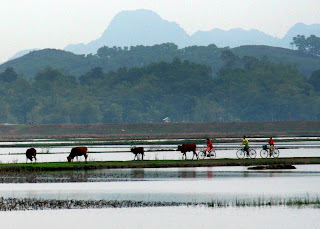 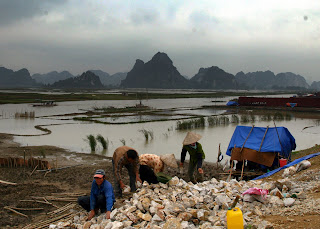 In general Vietnam was one of the most photogenic countries we went to.

Colorful market stall in Hoi An. 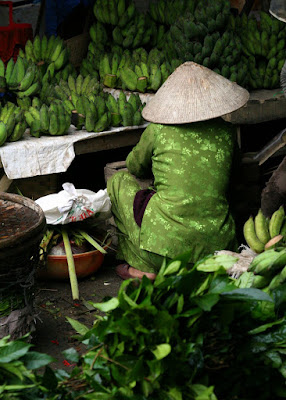 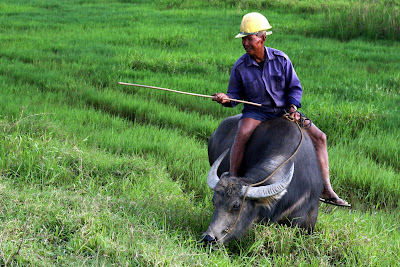 Boat Lady in Tam Coc. Often, they'll use their feet to oar the boat. We spent a day with a local family. This was the son. He kept shooting ruubber bands at everything. 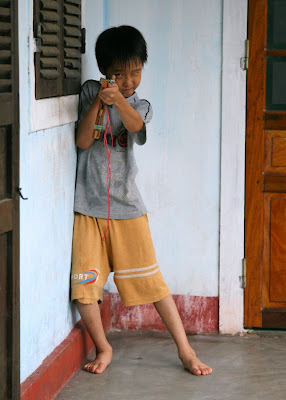 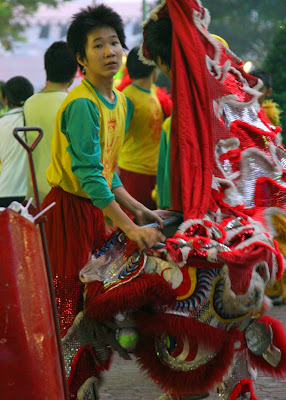 It rained often and the motocyclists would don these coloful rain capes making the whole street seem like it was was filled with supeheroes. 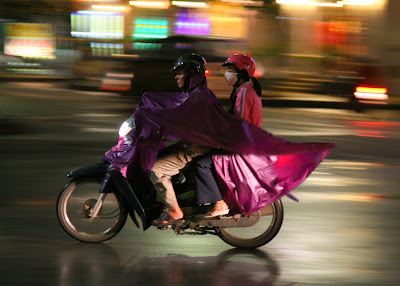 Net Fisherman near Hoi An. 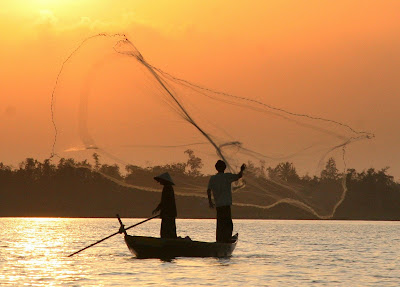 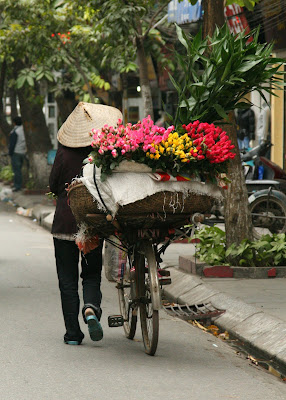 more street vendors. This one was carving Budha heads. 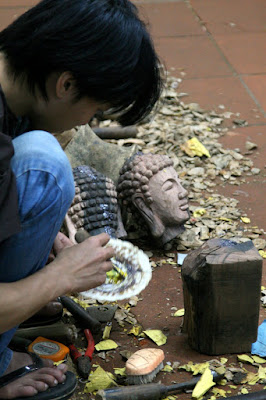 Posted by Helen and Ryan at 9:07 PM 7 comments: Links to this post

All good things come to an end

After eight months on the road without hardly a care in the world, having adapted to living out of a backpack, and being constantly stimulated with new sights, people, and culture, we finally bit the bullet and flew stateside to reunite with our long lost loved ones. It is with mixed feelings being back - yes, traveling was spectacular in too many ways to list and truly an experience of a lifetime, but it's great to be back on home turf. Hurray for home cooked meals and having a home base! We can go on and on about other things we've missed most but we'll save that for another day.

Looking forward to catching up with everyone! :)
Posted by Helen and Ryan at 10:50 AM 6 comments: Links to this post

Merry Xmas to all~!

In love with Laos

After Cambodia we flew north into Laos. Laos is a beautiful country with a bit of a black sheep history. Originally a Khmer vassal state, Laos was know as Lane Xang which translates to 'land of a million elephants'. Some 600 years later, during the 'secret' part of the Vietnam war, Laos could have easily been called 'Land of a million bombs' as the US dumped close to 2 million tons of bombs on Laos to curb the influx of NVA and Chinese supply lines (for purposes of comparison, about the same amount of bombs were dropped on Europe..by all sides..during World War II). To this day, many of these bombs remain unexploded and kill on average at least 1 person and 4 cows a day in Laos). Fast forward another forty years and it seems that with 40% of its population under the age of 14, Laos is now the land of a million children.

Our first stop was the capital city of Vientiane, home to the Laos national symbol Pha That Luang stupa. Vientiane is a relatively sedate town with a humbled (and crumbled) mix of traditional Lao, French colonial and Soviet modernist architecture. We spent a day here taking in the site (ok, maybe it was sites) and had a fresh river fish dinner at sunset on the silty banks of the Mekong.

Next day we flew on a Chinese made prop plane courtesy of Lao Airlines to the UNESCO heritage city of Luang Prabang.

LP is where our love affair with Laos really started. Despite the recent tourism fueled gentrification, this city was possibly the most romantic place we have been to yet in SE Asia. It has that quintessentially colonial Indochina look and feel to it with its narrow streets lined with traditional Laos and 19th century French inspired cedar, teak and bamboo bungalows, interspersed with gardens of lazily swaying palms and lotus ponds and many gilded wats. We wandered the local markets full of rug, fruit and handicraft vendors. We watched a local cultural heratige show put on by some of the towns kids. One little one was so captivated by the show...

..that he eventually joined in. We cruised longboats up the Mekong to some caves and handicraft villages and got our feet wet at a local waterfall.

The one mole on the face of this beauty was when someone stole my shoes from out front of our bungalow. Who steals shoes!~ Seriously. This is the last thing I would have expected in a country where it is customary (and often compulsory) to remove your shoes before entering most buildings and where the sandal clad natives don't even wear western shoes. Who steals shoes? Especially my shoes with their orthopedic insoles and countless gritty layers of sweat, road dirt and cow crap collected from 4 continents.

Then as if to laugh barefaced at my barefooted misfortune, fate would have it that the very next day while searching for a shoe store we walked past a street vendor selling what else? that's right..used western shoes. Unfortunately my shoes were not to be found amongst the other lost soles, and alas we found no store selling any shoes remotely close to my apparently sasquatchen foot size of 10.5. So with the sun setting on our trip and with a pair of $5 sandals strapped to my feet for the remaining 2 weeks, we decided to give up the hunt and head up the river to the remote (as in only accessible by river) village of Muong Ngoi for what else..trekking.

On the way to our boat we stumbled across an Hmong new year celebration where the teenage girls and boys line up facing each other and toss balls and pick-up lines back and forth in a colorful courtship ritual. Once they spotted a toe-headed falang (foreigner) though the Hmong stopped their games and quickly gathered to stare at this blond wonder as he beat a stick of sugar cane against a rock..kinda funny actually.

While in Muong Ngoi, we trekked to some local villages and hill tribes. Crossing streams and hiking across acres of rice paddies we came upon a village wedding and shared some beer and lao lao (rice whiskey) with them.

One of the three most magical things about Laos is the utter lack of modernity that most of the country lives in. Unlike other developed or developing countries we have traveled through, Laos is still pre-industrial in a lot of ways. Bamboo is the material of choice. Young men hunt squirrels and birds for meals rather than for sport. Rice farming is a subsistence activity not a commercial enterprise. Food is cooked in simple pots with simple tools. Another magical thing about Laos is it's river culture. In Laos, the river is the main street and the life blood of the village, connecting it to the next village and the rest of the world. It is the site of many of their productive, social and cultural activities. Families bathe, launder, travel, play, fish and forage weed from the many rivers sluicing through this karstic terrain. They divert it to flood the rice paddies and they stab it with propellers attached to dynamos to generate electricity from the currents. We found the combination of the river and this 'simpler' life to be soothing in a zen sort of way...something about the cool clear water crawling along its ancient course seemed to set a different pace for life..time slowed from morning to night. One of the biggest differences between this world and the rest of the world that we have seen is that the trash here is 'clean'.. well, clean like the dirt from a garden would be clean. Unlike the synthetic and toxic refuse from modern industrial cultures, the trash from these villages in Laos mostly consists of scraps of bamboo, dried palm fronds, cuttings from the recent rice harvest, and maybe some broken pottery or dried dung cake which they burn.

Everything else is recycled. Anything remotely mechanical in nature is used to create some much needed piece of equipment. For instance, anything roughly circular is quickly bolted to an axle and strapped to a piece of wood for use as a wheelbarrow. Hinges, nails, pulleys and latches are all collected and reused. Old bicycle tires are cut into strips and used as rubber waterproof lashings for the boats. Broken cups become ash trays, broken ashtrays become plant pots..etc. Aluminum is collected and smelted into propellers for the long boats. Plastic bottles are used to distribute the uber popular fermented rice wine (lao lao) dripped from makeshift stills (themselves usually made from old oil cans and bits of glass and rubber tubing). I do wonder though that if the scope of production in these 1500 people villages were scaled up proportionately to something the size of Los Angeles, and if the resulting organic trash were burned, what sort of air pollution it would cause..would it make Los Angeles seem clean proportionately? Despite these morning and evening piles of fire that cloud the valleys in smoke though, Laos still seems fairly ecological friendly and was as close as I have seen to the edenic models of sustainable subsistence economies touted by many luddite environmentalists. The downside to all of this of course is that life in Laos is hard. We had a hard time finding anyone over the age of 50. The Lao live a laborious life rowing and hoeing, they mature fast..getting married by 17 with a handful of kids by 30..then dead by 55. Any decent medical care by western standards means having to travel to neighboring Vietnam or Thailand...which explains the low life expectancy, high infant mortality and low median age.

But every cloud has its silver lining and so the third magical thing about Laos was all these young'uns running around. We saw more kids laughing, playing games, and running naked down the riverbanks to wave 'hello' than in any other country we have been to yet. Here's some fotos of the kids and their games that made Laos such a light hearted delight. 'Let's jump out of the tree' game 'roll the old bike tire with the stick' game

'knock the cards over with your shoe' game 'volley ball with our feet' game 'jump over the string' game cool and the gang Posted by Helen and Ryan at 10:46 PM 2 comments: Links to this post